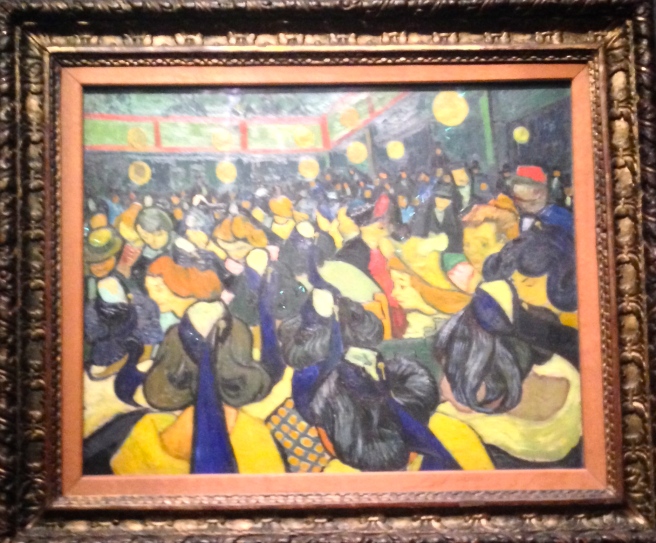 “It is looking at things for a long time that ripens you and gives you meaning.”
-Vincent Van Gogh

From The Louvre, The Musee d’Orsay is just a short walk across the bridge and along the Seine. But, a walk across and along the Seine is so much more than that, isn’t it? It is a stroll down Memory Lane, only they are not actual memories- they are all the imagined scenarios you’d hoped to collect someday but deep down never really knew how to conjure up into realness. And walking in Paris is not walking; it is at the very least saundering, and at its most honest expression, sailing. Sailing much like the boats- *ahem* bateaus– that pass you by as you do. They float ever so gracefully past, like giant white swans. As I watch them, I can’t help but think of that most charming scene in Charade, when, on a bateau just like one of these, Cary Grant says to Audrey Hepburn: “You should see your face right now.” Audrey, flushed in embarrassment, asks him, “What’s the matter with it?” He answers, “It’s lovely.” And in the most perfectly Paris of all replies imaginable, Audrey sighs amorously.

I know how important the Louvre is, but the anticipation of seeing THIS museum gives me butterflies. Butterflies with wings painted in van Gogh’s brushstrokes. I read that there are twenty-five of his works here. Twenty-five Van Goghs, all in one place. {Insert slow, enraptured, amorous, Audrey-esque sigh HERE}. The line outside this “musee” is anxious just like it was at the Louvre. A few steps inside and I behold an unfurled promise hanging from the ceiling: “Van Gogh: The Man Suicided By Society”- a whole exhibit dedicated to him and his tragedy. *Another amorous, grateful sigh*. I can believe nothing else other than that Heaven itself orchestrated this for me. The d’Orsay has no idea, after all, that I would be here, in Paris, this very day, during this very exhibit devoted to my very own van Gogh. What good fortune I seem to be having. I pick up one of the exhibit brochures, which I instinctively know I will end up saving forever: “A few days before the opening of a van Gogh exhibition in Paris in 1947, gallery owner Pierre Loeb suggested that Antonin Artaud (1896-1948) write about the painter. Challenging the thesis of alienation, Artaud was determined to show how van Gogh’s exceptional lucidity made lesser minds uncomfortable. Wishing to prevent him from uttering certain ‘intolerable truths’, those who were disturbed by his painting drove him to suicide.” Antonin Artaud was a French dramatist, essayist, poet, actor, and theater director. He was one of the fore runners in the European avant garde movement. Thanks to the copious amounts of America’s Next Top Model I inhaled in college, I know that “avant garde” means that Artaud was innovative when it comes to art and culture. His postulation, therefore, that society (namely Paul Gachet, who was Van Gogh’s physician toward the end of his life and whom Van Gogh once characterized as, “sicker than I am, or, shall we say, at least as much”) was inadvertently responsible for Van Gogh’s suicide was most likely radical at the time his booklet was published. Especially since Artaud himself was also once a patient at a mental institution… Anyway. The thing is, sometimes notions that are christened radical at their birth tend to be harbingers of a future norm. I once read an article in the Huffington Post that said, “Art is a reflection of humanity. And humanity’s greatest virtue is its ability to overcome adversity.” Perhaps Artaud, in his avant-garde, fractured mind, and Van Gogh in his abstract pain, were more in touch with humanity than the rest of us seemingly “un-tortured” souls.

Until this day, I have only ever seen two Van Gogh’s in real life: Vase of Roses and Irises. I was at the Getty in L.A. when I saw Irises for the first time. I was home from college for the summer. Sometime during my required readings about mitochondria and the American Revolution, I managed to sneak in a biography about van Gogh. It was a beautifully incisive account of his life, and I was quite effected by it. Seeing Irises up close makes you feel like van Gogh himself is confiding in you. It moved me deeply. And here I am, a decade later, in the company of not one or two or three, but dozens of his works, all in one congregation of sacred privilege. I reverently move from The Chair, to The Bedroom, to Cypresses, to his self-portrait, to Dance Hall at Arles (my second favorite of his, surpassed only by Women at the Garden at Etten– which I will probably never see since it is in RUSSIA. Although. I also thought I would never see about 98% of the things I’ve seen in the last 24 hours, so maybe my new creed should be “Never say ‘Never'”.) He paints in tones so vivid they communicate the soul of each color rather than the color itself. Even his very brushstrokes are emotive. I think if I knew nothing of him and his tortured, lucid soul, I would be able to sense it… Of course,  his internal torment is no secret between him and me. And yet, I still feel a kinship to it, somehow. Rather than crawl inside his agony, he bled it out onto these canvasses, and created raw, beautiful expressions. I would love to do that with my pain; reword it into something vivid that shows the soul underneath the agony… “I break through, I lose again, I examine, I grip hold of, I loosen… the néant [nothingness] has never done any harm to anyone, and what forces me to return to it is this distressing sense of absence, which passes by and sometimes drowns me, but I see very clearly into it; and I even know what the néant is, and I could tell you what is in it.”

I stand here for as many minutes as I can steal and it occurs to me that I have now stood mere feet away from two things that, until last year, seemed far, far away: Keith Richards and my {second} favorite Van Gogh.

Weaving in and out of the walls of this place is like being in a maze I never wish to find my way out of. Renoir gardens and Degas’ ballerinas and Cezanne fruits, and Lautrec’s unequivocal depictions of Parisian bohemia.  What would it have been like to have been a ballerina at the Paris opera house (gasp!), or a deminonde in the Montmarte quarter (different kind of gasp!)? These paintings… aren’t they really just interpretations of every day life at that time? I wonder if these ballerinas knew their lives would become masterpieces. And not just because life for them is now art hung on a wall for us to admire. But because life itself is an art form.

2 thoughts on “Sentimental Me”